Good morning my beautiful Rockers and Rockettes, how fair thee this morn'?

Tis Friday, a time to reflect on the last 7 days and note the positives, no matter how big or how small.  If they made you feel happier and more positive, made your heart lighter, made your face smile then they are indeed rocking moments! 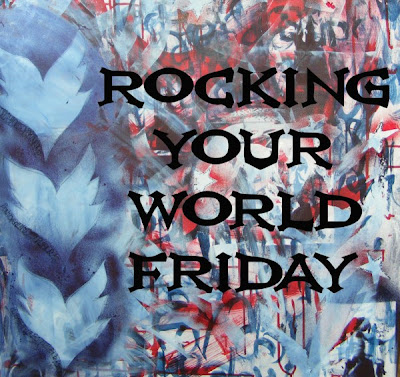 So without further ado here are mine

Friday night my sister and niece stayed over as we were going to Chatsworth County Fair on Saturday morning, setting off exceptionally early.  So it was easier for them to stay, we had a great evening, full of laughter and great conversations - so that has to be my first grateful this week.

Second up on this list has to be hubby and his insistence to take bacon butties with us to Chatsworth (I kid you not), when we went last year we rolled up and the car next to us piled out and started eating foil wrapped, hot bacon sandwiches, hubby was sooooooooooo not impressed.  So this year it was our turn, he was up early frying bacon, warm bread rolls and creating a culinary delight, we had a bag packed with hot bacon butties wrapped in foil and then insulated with clean tea towels, together with the world's most mahoosive bottle of ketchup to prevent us being doomed.  On arrival hubby took great enjoyment of dishing out hot bacon butties to us all to eat in the car park and two cars away from us was the family without the bacon butties who looked on in sheer disgust in the fact that they did not have hot bacon butties to start the day, I have a feeling we may have started something here.

Next up is hubby again for insisting on taking a good picnic with us because it was more than enough at lunch time (with lots left over but still quite cool in the chiller box) and at the end of the day when the announcer told us that the roads were absolutely solid with traffic and you might as well stay a bit longer it provided the second car park picnic of the day!

The show itself was great fun, we enjoyed the central arena where we got to see the mounted games - horse riders who race up and down with super fast horses doing all sorts of crazy races, but great fun to watch.  To the stalls we got to wander around, it is soooooooooooo big now it's mad, you really could spend all weekend there.  It was a little muddy underfoot in places but we were all in sensible footwear so it wasn't too bad for us.

The kids (I call them that, my niece is now taller than me and said 11 year old glowers every time he's called that) managed to buy a few things, they had a go on the cross bows, said 11 year old did water walking, they bought these magic water filled balls that you should use in vases, but they see as a great 'toy' to play with.  And my niece bought herself a lego ring (yes this was a ring with a piece of lego on). 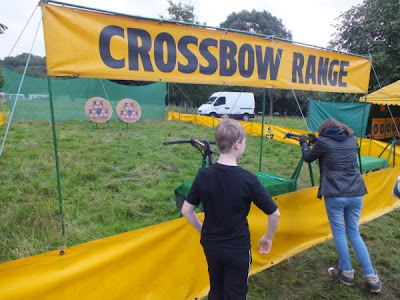 We arrived ten minutes before the gates opened and we didn't leave until ten to eight in the evening, so you can imagine how tired we all were, but much fun was had by all and for that I'm truly grateful.  Here we are at the end of a very very very long day! 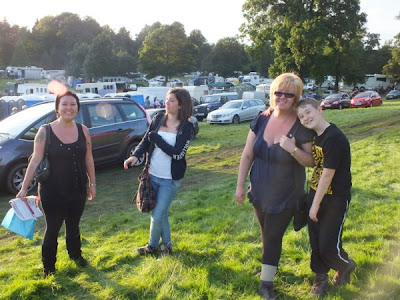 The Red Arrows - for another amazing display on Saturday - truly amazing to watch! 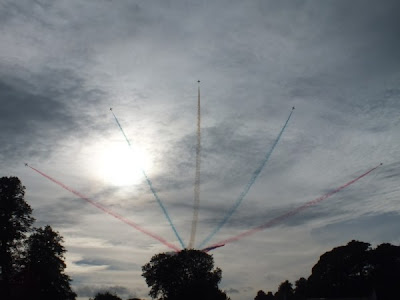 Another grateful hubby making me some zero point soup for my lunches at work - he is an angel!  And the soup is gorgeous!

Said 11 year old managing to get himself to secondary school on Wednesday, he set off at 7.30 on the bus with a change in the bus station and then travelled back at night arriving home at 4.30, as I type this it's Thursday evening and I'm waiting for his return today, let's hope he's had a good day again (fingers and toes crossed)

Then there are the family funnies, we don't get many these days, I put it down to said 11 year old getting so much older and not making quite as many slip ups but if we get them they are usually classics - this is the one that had me rolling this week

"Mum, Mum, come and look at this video it's Linkin Park and J-Zed"
(Giggle)
"He's not called J-Zed, he's call J-Zee"
Look on face - quizzical, so further explanation
"American's pronounce Zed's Zee's so his name is J-Zee"
"Ooh"
"So we say X, Y Zed and they say X, Y, Zee" (It's amazing what you remember from your brother and sister watching Sesame Street as children).
"So how do they say it Mum?"
"J-Zee, I've told you"
"No not them the others"
"What others?"
"The Welsh!"
"What?"
"How do the Welsh say it?"
"I have no idea I don't speak Welsh, how did we get onto Welsh" (I know how we got onto this, when we were in Wales recently, he bought the beginners book to Welsh and then talked Welsh at us for hours and hours and hours from the back of the car, all very distracting.)
"Hold up a minute, I thought you told me that the Welsh don't have Zed's in their alphabet!"
"I know Mum, that's what I mean"
"That's what you mean?  I'm lost what's the question again"
"How do the Welsh say his name"
"They would call him J-Zee because that's his name"
"Yes but they don't have Zed's in their alphabet"
"OK, so they'd call him J-?"
"Oh"
"So Mum how do they say zebra?"
"They would pronounce it zeebra"
"No not the Americans"
"Are we back to the welsh again?"
"Yes"
"I thought they don't have zeds in their alphabet I don't think they do, so how do they say zebra crossing"
"I'm sure I just told you that I don't speak Welsh"
and on it goes

Does anyone else have conversations like this or just me?

Right me lovelies that'll have to do today as I'm shattered been doing some pretty awful mathematical equations today and now got a headache, hoping to spend a bit more time with hubby and said 11 year old.  I'll leave you with a layout (because I can and because I haven't for a while) and obviously Mr Linky, if you fancy joining us we are quite a small group of great friends whom have only ever met through the computer who celebrate the positives each week to remember just how lucky we are.

Aptly this is a picture of the veiled lady at Chatsworth house, this time using the 3 x 3 inch squares to create the page, lots of stitching and finally managed to include one of the gorgeous little hands that Susie sent me on a layout!   Thank you Susie 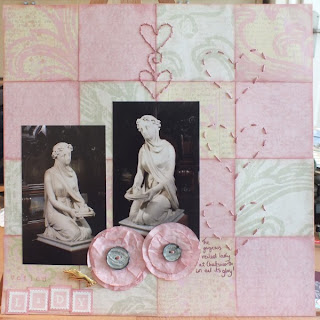